There’s an old myth that dogs and cats can’t get along, but anyone who owns a feline and canine knows most times they become the best of pals. In the case of a new puppy and his feline friend, things got off to a rocky start. As the puppy’s owner introduced him to their cat, the adorable kitty extended her paws and seemed to “bat” them at the dog, as if to play. 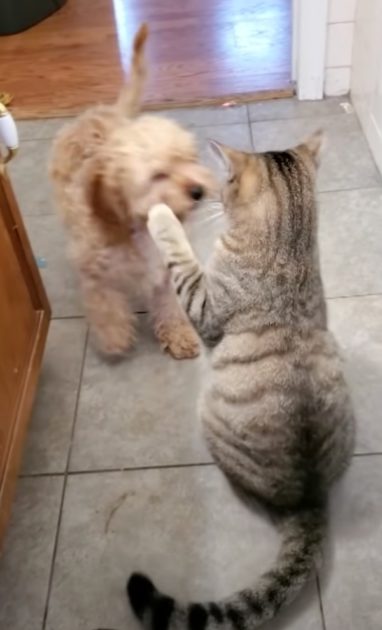 The puppy had no idea what was going on because he hasn’t been in the world long enough to understand. The tiny pooch let out a squealing sound but the cat continued to bat her paws at him. Poor kitty simply wanted the pup to know she wasn’t a threat and she was just being playful as cats often are. Within a few moments, however, the puppy decided he was going to implement a backup plan.

He left the room as his owner continued filming the scene. Within moments, the little puppy returned but this time he had reinforcement. He seemingly “herded” a big dog to come into the kitchen and make the kitty stop batting her paws at him. The cat leapt high onto a counter where the bigger pooch could not access her. 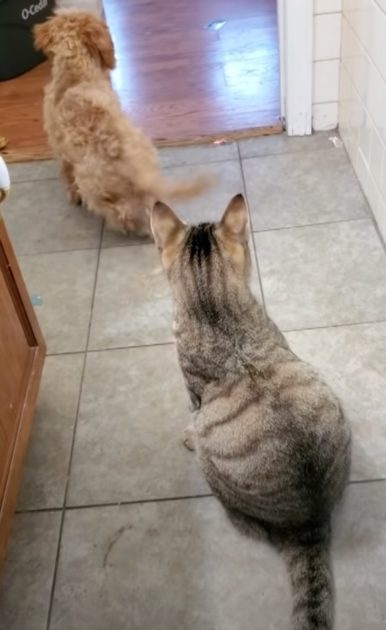 The adorable scene can be seen by pressing play on the video below. We love it when dogs and cats play so well together!